For most people, our garages are nothing special or spectacular but they serve a useful function as a place to park the car or somewhere to store tools and other household odds and ends. So when does a garage become more than just a garage? Well, when it becomes a very expensive garage for one. Here we take a look at some of the most expensive garages in the world:

The garage next to Harrods department store in London will cost you a mere £700,000. No it’s not gold plated or even that big but it sits in a piece of prime location and that’s what costs. It is only 6.4 metres wide and 4.75 deep but costs more than three times an average sized home! The prime spot is on Rysbrack Street in Knightsbridge and is a prized possession as freehold parking does not come easily in this part of London.

Craig Jackson is the CEO of a car collection company and as such has a considerable collection himself. He had a garage purpose built next to his home in Paradise Valley, Arizona to hold all his muscle and luxury cars. The garage cost $2 million and is shaped like a tyre with a roof and lighting resembling a hub cap. The cars are neatly displayed and positioned around the side facing the centre, so as to look like the spokes of a wheel. In the middle lies his crown jewel – a Bugatti Veyron on a slowly rotating pedestal. Wow! The garage covers 3,600 square feet and took 2 years to construct. Everything inside, including lighting, is controlled by a computerized system. As not many of us can afford a completely automated garage system, why not at least have some kind of organised system? For Garage Shelving Systems, visit https://www.garage-shelving.co.uk/.

Not much is known about John Travolta’s garage, only that it’s pretty impressive. His Jumbolair estate can accommodate his Gulfstream jet and a Boeing 707 plus an array of support vehicles for the aircraft. There is an incredible 1.4 mile runway that leads up to the garage and while we have no idea how much it cost – we know that kind of set-up does not come cheap! 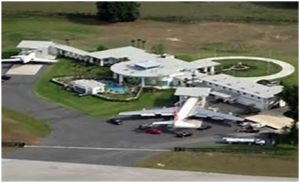 Tom Gonzales is a retired software engineer, who, after selling his company was able to buy an estate in Lake Tahoe, Nevada. Here he built an astounding garage to home his car and motorcycle collection. The vehicles are kept in a building that looks like a mansion whilst another part of his collection is stored in underground. The lower floor is accessed by an elevator. This is no ordinary elevator though and is 60 feet long, 12 feet wide and 15 feet high to accommodate up to 3 cars at once! The underground garage is climate controlled and has no supporting pillars to make it easier to drive around.

There is a garage in New York that will set you back a cool $1 million. The garage is only on sale to people who live in the eight storey building and will come with its own deed of sale and contract. As in London, parking really is at a premium in the Big Apple and the high price tag is probably the fact that this garage has direct street access.