Most of the UK’s towns and cities have a problem with birds. Large numbers of pigeons, gulls, starlings or geese cause obvious problems of fouling, but there can be even more serious consequences. 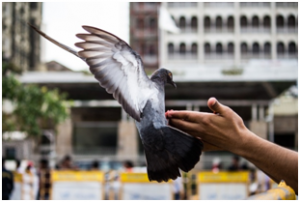 If you have a lot of birds roosting on your building, they will inevitably leave a large amount of faeces on ledges and roofs. The acidic nature of the faeces can cause erosion to stonework and exterior woodwork and cause damage to vehicles parked underneath. The debris from nests can block gutters, which can lead to damp or even leaks, and gas flues, which is clearly dangerous. Pigeons and gulls are also large enough to dislodge.

Bird faeces can cause diseases, some of which are potentially very serious. Psittacosis is spread by bacterium in the faeces, while Cryptococcosis and Histoplasmosis come from fungus found in soil contaminated by faeces. The symptoms of these diseases in humans are quite mild, but they can be deadly, particularly for anyone with a compromised immune system from HIV or cancer. If a roost has become well-established on a building, the ventilation system can become contaminated. Disease can also come from the mites and bacteria attracted to the debris left by birds.

When a flock of geese takes up residence in an urban area, they leave an enormous quantity of droppings. This not only carries the threat of disease, but it can also make paths and pavements dangerous to walk on. Geese can be aggressive, particularly in the breeding season, as can gulls.

What can be done?

Prevention is always better than cure. Birds are attracted to human habitats because there is food available, so it makes sense to ensure that all rubbish is disposed of securely to deter scavenging. Check how safely your supplies of food for pets or other animals are kept, and ensure bird feeders are protected from nuisance visitors. Further useful advice is available from the RSPB.

You can protect access on the exterior of your building with netting or other deterrents, but it may be best to use professional nuisance bird management services, such as http://www.vvenv.co.uk/ to undertake this.

Professionals also have the skills, equipment and licences to manage nuisance birds using falconry, trapping or shooting, which is otherwise against the law.