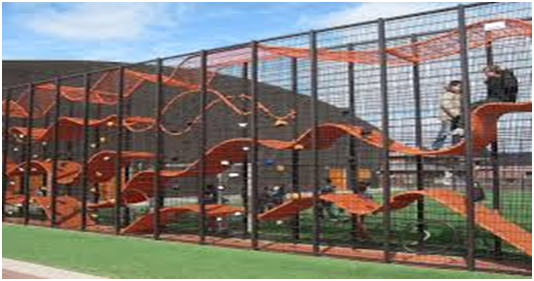 Play is vital for all humans, young and old but particularly developing children. The more diverse a range of play equipment used, the better, to increase motor skills, take risks, overcome fears and get a real sense of achievement. There are some places in the world that have listened to the experts and decided to provide a really stimulating play environment, making them the coolest playgrounds on earth, where childhood can be unleashed and boundless joy is possible.

Swarovski Crystal Worlds is perhaps a strange location for such unfettered fun and whilst the kids might not give two hoots about the history of Austrian crystal, the company museum has a playground that certainly makes the tour worthwhile. It features a four story play tower with a trampoline, rope swings, slides and a 45 foot tall climbing net. Never mind the crystal, last one in is a rotten egg!

In an attempt to create the playground of the future, Shelby Farms Park in Memphis, USA decided to build a park in the woods but requested the help of the local children in advising how they wanted to play. The result is a fascinating series of play nests where children have to seek out opportunities to climb, slide, swing, scramble and run. There are treehouses and climbing nets and the different areas are connected by an ivy-covered walkway. To create some fun in your own back garden, take a look at Climbing frames for older children. For more information, visit http://www.niclimbingframes.com/climbing-frames.

Lake Macquarie Variety Playground in Australia really caters for everyone. It is designed for children of all abilities including visually impaired and kids in wheelchairs. It features accessible swings, a play boat, musical play equipment, a zipline and a 30 foot spiral slid among other things. A definite winner for every child.

The New York Hall of Science has its very own Science playground and is the largest of its kind in the U.S. There are waterworks, giant spider web climbing net, a giant seesaw and every piece of equipment is designed to focus on the exploration of motion, machines and balance. And there’s room for everyone in this 60,000 square foot outdoor play space.

Why not try the skyscraper equivalent of a playground at the Wallholla in the Netherlands. It was designed to accommodate a large number of children in a small space at a school playground. A series of thin platforms run throughout a wire mesh cage that kids can clamber in and out of at the same time. It’s been pretty popular and is now being sold in the U.S. 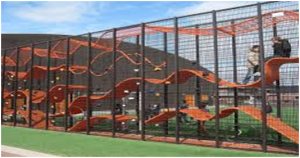 Zip World in Wales has done incredible things with an old Victorian slate mine. It has been converted into a giant underground playground with huge trampolines and bouncy nets joined by slides and walkways. There are different levels with the highest being 180 feet above ground. They have recently introduced a session for younger children to enjoy this cavern of craziness too.

St Louis’ City Museum is a museum designed for kids and big kids as it is essentially one big play area. Inside you will find some amazing activities like a giant treehouse, a 10 story spiral slide to take you into the building’s basement, a 30 foot tall ferris wheel on the roof and different airplanes that you can crawl into. This is one museum your kids won’t grumble about being boring!