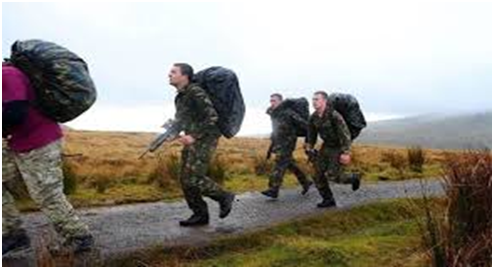 The Special Air Service or SAS as they are better known is the envy of the world. Even the Americans use our selection process for their own Delta Force applicants. The selection process is tough, really tough and a only a small number make it through to the end. It takes five months and has a 90% fail rate. In fact, it also suffers deaths and in recent years has claimed the lives of men suffering from freezing conditions in one case and heat stroke in the other. It is certainly not for the faint-hearted and can break even the toughest men.

The first phase of selection has not changed in sixty years and features a series of timed marches and just to make it that bit harder, the marches are over the Brecon Beacons and carrying a 45 lb rucksack and rifle.

There are also basic military physical tests to be undertaken and then a ‘beast’ over the highest peak in the Beacons. This is followed by three weeks of map-reading over the hills and then the ‘Test Week’ when the most grueling marches take place. The load that needs to be carried gets heavier and heavier until the final march which is ominously named ‘Endurance’.

Endurance is forty miles of marching with no stopping and under timed conditions, carrying a 60 lb rucksack, rifle and water. By this stage, many of the original applicants have fallen by the wayside but those who remain will have earned a place on continuation training and head off to the jungles of Belize. If you want to enjoy the fun of being a soldier but only for a day, then why not think about Tank driving activities. For more information, visit https://www.armourgeddon.co.uk/tank-driving-experience.html

For any officers on the course, they also have to endure Officer’s Week. Jungle training teaches candidates the basics of surviving and patrolling in hostile conditions. These jungle patrols have to liver for weeks behind enemy lines in four man units and eating rations. This is testing both mentally and physically. The SAS needs soldiers who can carry on even when under intense pressure and in awful environments with apparently no lifeline.

Phase 3 involves escape and evasion and tactical questioning. The candidates are let loose in the middle of nowhere with instructions to reach specific checkpoints without being captured and this lasts for 3 days. Tactical questioning is the part we have most likely seen portrayed on screen and involves the men’s ability to resist interrogation. This is extremely harsh and can involve standing in stress positions for hours, being forced to listen to white noise and sleep deprivation leading to confusion and disorientation. Failure will be instant if you reveal anything other than your name, rank, serial number and date of birth.